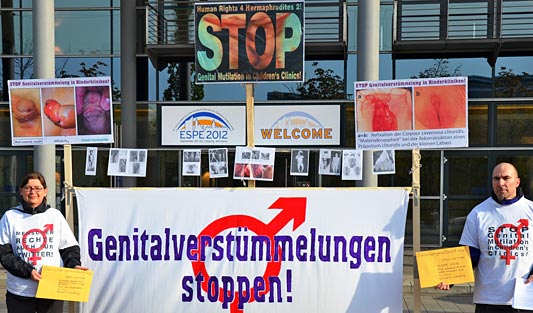 Dear Board, Scientific Committee and Members of ESPE
Dear Speakers, Chairpersons and Participants of the 51st Annual Meeting of ESPE

As members of a human rights advocacy group, and as survivors of non-consensual childhood surgeries as well as persons concerned grateful for having escaped such surgeries, we are deeply saddened and concerned about how an apparently overwhelming majority of the speakers and chairpersons at the 51th Annual Meeting of ESPE covering non-consensual elective surgeries on children seems to refuse to listen to their former patients, and instead continue to advocate and perform medically unnecessary cosmetic genital surgeries on children no matter what the consequences for these children.

Furthermore, we are deeply saddened to learn that the dissemination of systematic cosmetic amputations or excisions of clitorises considered ‘too big’ on children in europe is  inextricably linked to both ESPE as a society from its very beginning as well as to prominent individual members like e.g. Andrea Prader or Jürgen Bierich, and that they both are praised and immortalized by scientific prizes bearing their names given out in part by ESPE, despite the fact that e.g. the latter stubbornly advocated clitoral excisions on the basis of ‘scientific proof’ that the removal of a functioning clitoris would cause ‘no harm’ to the persons ability of experiencing orgasms. [1] While we recognise the medical achievements of both ESPE and its members, we feel it is intolerable to not also acknowledge their errors and the lifelong suffering they caused to the people concerned. We feel it is long overdue for ESPE to start a process of coming to terms with the past in order to be able to working towards a better future not tarred by unnecessary suffering and grave human rights violations.

For 60 years now, the practice of systematic cosmetic genital surgeries on children with ‘atypical’ genitals persists. In all these years and decades, the clinicians responsible weren’t able to produce any evidence for the alleged benefits to the children concerned, not even adequate follow-ups, or even just to disclose bare statistics, but instead insist on continuing to operate on the basis of mere anecdotal evidence.

For 20 years now, survivors of these surgeries have protested them publicly, describing them consistently as ‘very harmful’ [2] [3], ‘traumatizing’ [4], ‘immensely destructive of sexual sensation and of the sense of bodily integrity’ [5], and have compared the surgeries and their effects to female genital mutilation [6] and child sexual abuse [7]. For 20 years now, the clinicians concerned have mainly refused to heed, let alone acknowledge these serious concerns, but instead keep on repeating the same old excuses [8], ‘essentially impervious to data’ [9].

During the last decade, these accusations of survivors have been backed again and again by human rights experts [10] and clinicians alike [11].

However, as far as we know the vast majority of the clinicians concerned just keep on turning a blind eye to these criticisms, and it is still mainly endocrinologists advising parents to ‘consent’ to such surgeries for their children [12].

Something we find especially regrettable are the repeated statements by clinicians relishing the ‘surgical challenges’, and stubbornly continuing with their ‘experiments’ in the hope that ‘in 20 years surgery will be much better’, seemingly without any care, pity or compassion with their unfortunate past, present and future ‘subjects’.

The same applies to certain approaches towards adult survivors of such surgeries who speak out about their suffering and demand an end of non-consensual cosmetic genital surgeries on children and minors, as well as to the endeavours to marginalise their experiences, to deride them publicly and to deny their right to voice their experiences and opinions. Same as the claims of clinicians, actually to be the ones who are victimized themselves, the alleged victimizers being survivors of non-consensual cosmetic genital surgeries on children and human rights advocates.

We also deeply regret that the 51th Annual Meeting of ESPE fails to adequately address the ethical and legal implications of non-consensual cosmetic genital surgeries on children, despite the ongoing scholarly and public debate. There are many distinguished experts in the field of Ethics and ‘DSD’, such as Alice Dreger, Katrina Karkazis or Ellen Feder, who engage with these ethical issues, as well as legal experts like Anne Tamar-Mattis. Unfortunately, none of these were invited. In our opinion, this demonstrates a regrettable lack of willingness to listen to critical voices, let alone to enter into a real debate.

There are many reports and statements by Human Rights Advocacy Groups (for example, Terre des Femmes 2004, San Francisco Human Rights Commission 2005, CEDAW 2009, Amnesty Switzerland 2010, Amnesty Germany 2010), as well as publications by experts in these fields (such as Hanny Lightfoot-Klein 2003/2008, Fana Asefaw 2005, Nancy Ehrenreich/Mark Barr 2005), all of them concluding that non-consensual cosmetic surgeries on children gravely violate human rights, particularly the childrens’ right to physical integrity, and who underline the similarities and parallels between these surgeries and the generally condemned practice of female genital mutilations.

We are sure you are aware of the growing controversy about non-consensual cosmetic genital surgeries on children also becoming better known to the general public every month, as well as of the leaning of the general public regarding genital mutilation, unethical medical experiments and unwanted surgeries.

It is our understanding, that in your capacity as clinicians you have plenty of patients with actual medical needs who depend on your professional help, as well as that the the 51th Annual Meeting of ESPE also addresses real medical issues like e.g. diabetes or thyroid.

Therefore, we would like to suggest respectfully that you consider focusing your efforts on helping those patients, of whom we are sure that they are deeply grateful for your services, but on the other hand abandon unethical, inhumane and illegal practices like non-consensual cosmetic surgeries on children, while you still can do so on your own terms. And at the same time start a process of coming to terms with the past of these practices linked to the history of your society. 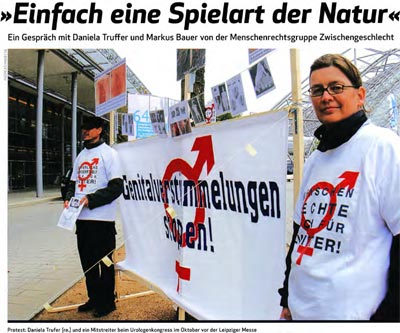 "A variety of nature" Interview in local magazine (in german, PDF)

[9] Cheryl Chase: ‘What is the agenda of the intersex patient advocacy movement?’ (2002) http://www.isna.org/agenda 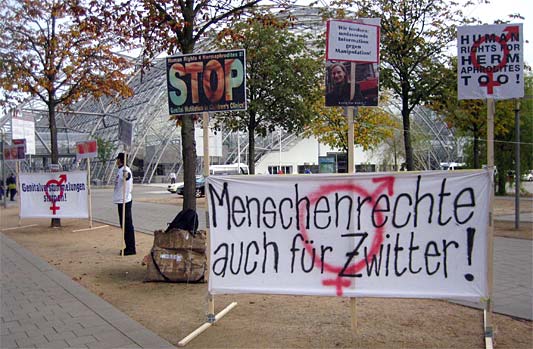