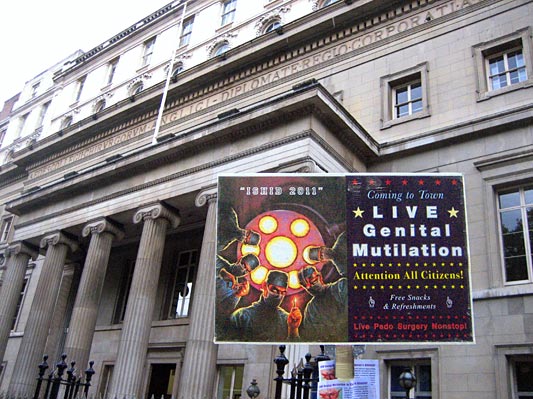 As survivors of non-consensual childhood surgeries (non-consensual surgery, in this context referring to surgery for which the person suffering the surgery did not personally give prior, fully informed and free consent), as well as persons concerned grateful for having escaped such surgeries, we are very saddened and concerned about how, as far as we can see, an overwhelming majority of the speakers and Chairpersons at the ‘IV World Congress on Hypospadias and Disorders of Sex Development hosted by the International Society for Hypospadias and DSD (ISHID)’ seems to refuse to listen to their former patients, and instead continue to advocate and perform medically unnecessary cosmetic genital surgeries on children no matter what the consequences for these children. We deeply regret that the Royal College of Surgeons of England, the Great Ormond Street Hospital for Children and the University College Hospital Education Centre take part in such a questionable endeavour, including the infamous ‘live surgeries’.

For 50 years now, the practice of systematic cosmetic genital surgeries on little children with ‘atypical’ genitals persists. In all these years and decades, the clinicians responsible weren’t able to produce any evidence for the alleged benefit to the children concerned, not even adequate follow-ups, or even just to disclose bare statistics, but insist on continuing to operate on the basis of mere anecdotal evidence.

For 20 years now, survivors of these surgeries have protested them, describing them consistently as ‘very harmful’ [1] [2] , ‘traumatizing’ [3], as ‘immensely destructive of sexual sensation and of the sense of bodily integrity’ [4], and have compared the surgeries and their effects to female genital mutilation [5] and child sexual abuse [6]. For 20 years now, the clinicians concerned have refused to heed, let alone acknowledge these grave concerns, but instead continue repeating the same old excuses [7], ‘essentially impervious to data’ [8]. 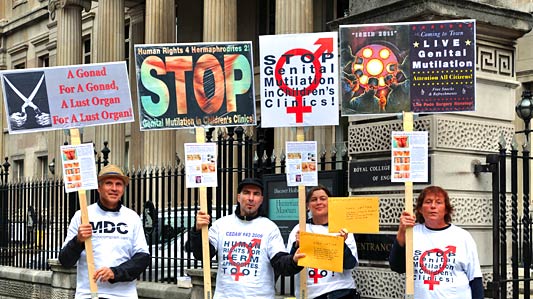 Peaceful protest outside the Royal College of Surgeons of England, host of 'ISHID 2011',
with Open Letters to be delivered to ISHID and RCS, London September 18th 2011

During the last decade, these accusations have been backed again and again by human rights experts [9] and honest clinicians alike, perhaps most notably by doctors from Middlesex/UCL [10].

However, as far as we know the vast majority just keeps on turning a blind eye to these criticisms of the surgeries. A few examples from the roster of ‘ISHID 2011’ include:

Considering this, it comes as no surprise that the ‘IV ISHID World Conference’ culminates in a day of unethical and inhumane ‘live surgeries’, ‘including refreshments’.

Something we find especially repugnant are the repeated statements, amongst others, by aforementioned  clinicians relishing the ‘surgical challenges’, and stubbornly continuing with their ‘experiments’ in the hope that ‘in 20 years surgery will be much better’, obviously without any care, pity or compassion with their unfortunate past, present and future victims.

The same applies to the continuing scorn for, and intolerably paternalistic approaches towards, adult survivors of such surgeries who speak out about their suffering and demand an end of non-consensual cosmetic genital surgeries on children and minors, to the endeavours to marginalise their experiences, to deride them publicly and to deny their right to voice their experiences and opinions. Same as the claims of clinicians, actually to be the ones who are victimized, the alleged victimizers being survivors of their surgical experiments and human rights advocates. 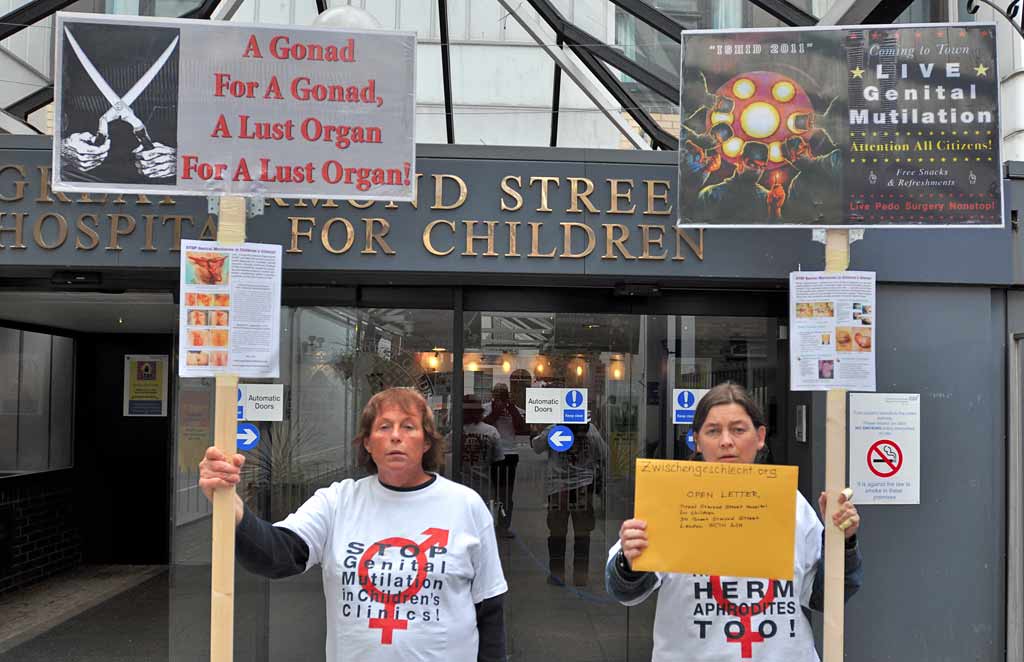 Peaceful protest outside the Great Ormond Street Hospital for Children, host of the
infamous 'ISHID 2011 Live Surgeries', with Open Letter to be delivered to GOSH,
London September 18th 2011

We also note that the ‘IV ISHID Conference’ utterly fails to address the ethical and legal implications of non-consensual cosmetic genital surgeries on children, despite the ongoing scholarly and public debate. There are many distinguished experts in the field of Ethics and ‘DSD’, such as Alice Dreger, Katrina Karkazis and Ellen Feder, who engage with these ethical issues. Unfortunately, none of these were invited, and where speakers with a background in ethics like Sharon E. Sytsma appear in the programme, the framing is not about the ethics of harmful non-consensual cosmetic treatments, but is tellingly about replacing one unethical treatment with another. In our opinion, this demonstrates an obvious lack of willingness to listen to former patients, let alone to enter into a real debate in general and to answer to any critical questions in particular.

There are also many reports and statements by Human Rights Advocacy Groups (for example, Terre des Femmes 2004, San Francisco Human Rights Commission 2005, CEDAW 2009, Amnesty Switzerland 2010, Amnesty Germany 2010) and publications by experts in these fields (such as Hanny Lightfoot-Klein 2003/2008, Fana Asefaw 2005, Nancy Ehrenreich/Mark Barr 2005) clearly stating that non-consensual cosmetic surgeries on children gravely violate human rights, particularly the right to physical integrity, and who underline the similarities and parallels between these surgeries and the practice of female genital mutilations. Again, we feel an obvious lack of willingness by the ‘ISHID 2011’ to acknowledge the facts, let alone to enter into a real debate in general and to answer any critical questions in particular.

We are sure you are aware of the controversy about cosmetic genital surgeries becoming better known in the general public every month, as well as of of the leaning of the general public with regards to genital mutilation, unethical medical experiments and unwanted surgeries.

It is our understanding, that in your capacity as clinicians you have plenty of patients with real medical needs who depend on your professional help, as well as the ‘IV ISHID Conference’ partly also addresses real medical issues with bladder or urethral function.

Therefore, we would like to suggest respectfully that you focus your efforts on helping those patients, whom we are sure that they are deeply grateful for your services, but on the other hand abandon unethical, inhumane and illegal practices like non-consensual cosmetic surgeries on children, for which, as you are surely well aware, many, many of your former patients loathe and despise you from the bottom of their hearts, and wish you things, which our sense of politeness forbids us to repeat in this letter.

And we humbly suggest that you do so while you still can on your own terms.

Affiliations given for identification purposes only. 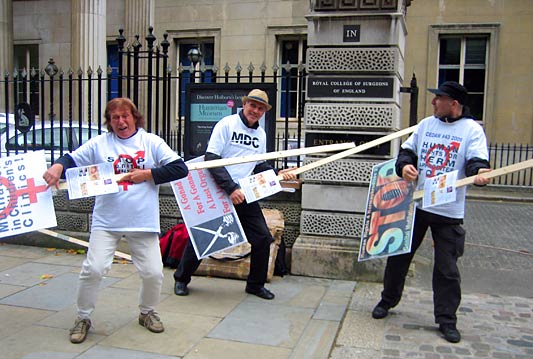 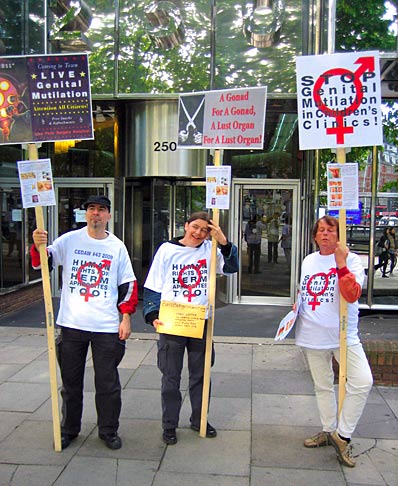