"Justice for Santhi Soundarajan and Caster Semenya!" - Hermaphrodites rally against IOC and IAAF, 19.11.09 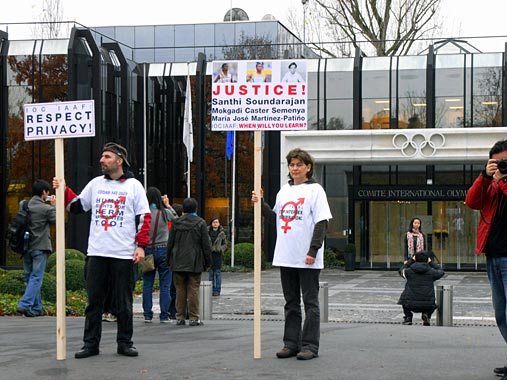 The human rights advocacy group Zwischengeschlecht.org will protest against the inhumane and demeaning treatment of athletes suspected of being "hermaphrodites" in Lausanne, Switzerland, in front of the headquarters of the International Olympic Committee (IOC), next Thursday, 19th of November, at 09:00 hours.

Despite of being aware of the issues related for some decades, IOC and IAAF, up to now they failed to finally determine and implement transparent, fair and internationally binding ground rules concerning the participation of hermaphrodite / intersexed athletes in games and tournaments, nevertheless doing so with reasonable consultation of the people concerned and their organisations.

Justice for Santhi Soundarajan, Caster Semenya and countless others!

The victims of these failures of the sports associations are the athletes singled out by often inapted and intransparent "sex tests". These athletes are treated like cheaters and impostors by the sports associations, and subsequently are excluded from further competition without due process, are forced to undergo often harming surgeries, and have their livelihoods and reputations destroyed by confidential medical information deliberately leaked to the media. Another particularly unsavoury aspect: Athletes from "developing countries" seem to be treated especially inconsiderately.

Zwischengeschlecht.org will protest against the irresponsible treatment of (suspected) hermaphrodite athletes in front of the headquarters of the International Olympic Committee (IOC) in Lausanne, Switzerland, and will deliver an Open Letter to the IOC as well as to the IAAF, on Thursday 19th of November 2009, from 09:00 hours.

The human rights advocacy group Zwischengeschlecht.org demands the prohibition of forced genital surgeries on intersexed people and "Human Rights for Hermaphrodites too!" 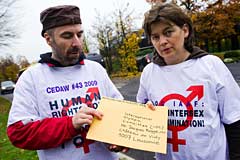 Published on Monday, November 16 2009 by Zwischengeschlecht.org