Open Letter of Concern to 'Transgender and Intersex in the Arts, Science and Society', Dresden 18.-20.1.2012 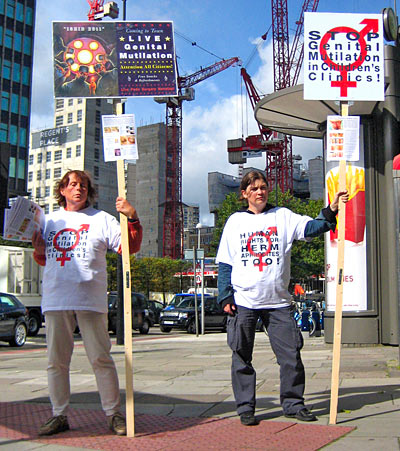 Dear organisers, speakers, participants and sponsors of the international & interdisciplinary conference "Transgender and Intersex in the Arts, Science and Society"

As a human rights advocacy group taking a stand against the daily genital mutilations in children's clinics for four years, we are pleased that your conference starting today in Dresden "will also stress the political, legal and social dimensions" of intersex (Programme) and "will make the people concerned heard and raise public awareness" (Press Release 9.1.12).

As "leading scientists of intersex research" (Press Release 9.1.12), surely you are well informed

• that at least one in thousand children are born with "atypical" genitalia, and that according to studies by the doctors themselves, 90% of these children are submitted to "corrective" cosmetic surgeries, without an actual medical need

• that survivors of such surgeries have been denouncing them as "immensely destructive of sexual sensation and of the sense of bodily integrity", as "western genital mutilation", "medical crime" and "fundamental human rights violation"

• that stopping cosmetic genital surgery for children remains the first demand of virtually all organisations of survivors from the beginning until today.

However, considering the publicly available communications regarding the conference, our human rights advocacy group cannot recognise, how the conference will actually

a) adequately address the problem of the daily mutilations of children with "atypical" genitalia, let alone "raising public awareness", and

b) which speakers will focus on a praxis to actually stopping these daily mutilations, or otherwise "make the people concerned heard", and "stress the political, legal and social dimensions" of problem of the daily mutilations.

• that for years, the people concerned have been criticising the common practice of using of intersex as a central theme in the field of science and politics while disregarding the actual ongoing mutilations, and denounced this practice as harmful, unacceptable, and appropriation.

Further, the organisers and speakers surely should be well informed

• that within virtually all the scientific institutions directly or indirectly involved in the conference, in their pediatric surgeries departments, exactly the denounced mutilations are taking place undisputed, year in, year out, actually being done to helpless little children, a.o. at:

The human rights advocacy group Zwischengeschlecht.org is deeply concerned that, at an international & interdisciplinary conference sporting the notions "Intersex" and "Society" in its title, of all things the daily genital mutilations, as well as the voices and concerns of the actual survivors, seem to be disregarded.

In the name of people afflicted or threatened by childhood cosmetic genital surgery, we kindly ask the organisers, speakers and participants to let us know:

1) Are you informed, which institutions directly or indirectly involved in the conference, perform a) which and b) how many cosmetic genital surgeries on children?

2) Please state your position regarding cosmetic genital surgeries on children.

3) Why are survivors of childhood cosmetic genital surgeries not adequately represented at the conference?

4) Are you ready do contribute to actally ending the daily genital mutilations in children's clinics? If yes, how? If no, why not?

We would be pleased to receive your feedback.

The human rights advocacy group Zwischengeschlecht.org demands the prohibition of cosmetic genital surgeries on children and minors and „Human Rights for Hermaphrodites too!“ 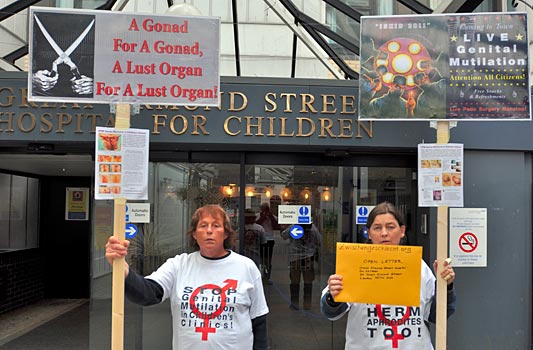