"May your hand rot off, which you used to mutilate defenceless children!" 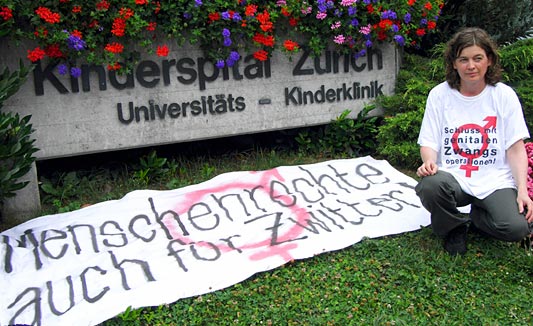 Speech by Nella to future doctors:

My name is Daniela Truffer, I am co-founder of the human rights advocacy group Zwischengeschlecht.org. I was born a hermaphrodite, and for decades, I was in hiding and in denial. Today, for more than three years I've been publicly fighting against cosmetic genital surgeries on children and for human rights for hermaphrodites, too. Thanks to almost ten years of psychotherapy and coming to therms with the crap that's been done to me, I'm still alive and able to feel joy again, free from years of compulsion and fears.

However, the idea of talking in front of budding doctors still feels horrible to me. A sleepless night, endless nausea and diarrhoea. Angst, shame, disgust, anger are the feeling that well up inside me. Anger, that I as a seasoned hermaphrodite still have to be afraid of standing in front of a bunch of youngsters, just because they're studying medicine. It's a mark you never get rid of.

Too much I've been traumatized by these inhumane treatments, which, for the alleged good of the children, are still predominantly done today. Only too well I remember the various examinations, the eyes and hands, the smell, even the rustling of the white coats! And I'll never get rid of these memories: from day one in this world, I was looked between my legs, they prodded and pulled my ambiguous genital, fingers and objects were thrusted into, me to see how far they went in. They talked about me, but not to me. They decided on me, without ever asking me.

At two and a half months, they castrated me, threw my healthy testicles into the dust bin. The doctors decided, I should grow up as a girl, my parents were instructed accordingly. At seven, they shortened my ambiguous genital. After the surgery I went into shock, developed multiple haematoma and necrotic tissue. Pain and scars remained. That I could have died during these surgeries because of a serious heart condition, was of no interest to the doctors. At eighteen, a vagina was tinkered, where there was nothing before.

My parents and myself were always lied to an fobbed off with half truths. We were told, I had had degenerated ovaries. It's only a few years since I learned the truth.

Even today, in most cases parents are ill or only partially informed, children are kept in the dark about their true sex, and surgeries are forced upon them. Allegedly, so they can live happily. How happy they really are comes out only decades later, when they realise, what was done unto them. Usually at a time, when they don't even have the possibility of dragging their mutilators before a court, because the statute of limitation was exceeded long ago. Then you have to live with that, and with all the physical and psychological consequences, that you've been made a victim and have no chance to change that, because nobody cares, because everyone's looking the other way.

This inhumane treatment has overshadowed all aspects of my life. I tried to live as inconspicuously as possible, to be normal. However, it doesn't work. The surgeries and the lies make everything just worse. Everything one tries and achieves is null, because one carries a big black hole inside oneself, and every day of one's life, one stands in front of it and despairs.

88% of all hermaphrodites attempt suicide, a third of them succeed. Same as victims of sexual abuse or torture, most hermaphrodites that had surgeries forced upon them direct their anger and their hatred against themselves, instead of calling their tormentors to account. Impotence. They are afraid of their own anger. But most of the hermaphrodites I know, most of all they would like doing the same to those, who mutilated them and destroyed their lives.

Some have not much to lose any more. As a result of the castration and the lifelong substitution with foreign hormones, their health is severely deteriorated, and because of the genital mutilations, their sexual sensibility is completely gone. They are not able to work any more, lose their footing, are finished.

Personally, I don't want to resort to an eye for an eye, though I admit to having thought about it, and I don't want to have to be imprisoned even more on behalf of my castrators and genital mutilators.

So the only thing left for me is finding other ways of standing up for hermaphrodite children, so that at least they may live in the future. To be a voice for your future patients, to convince you, that cosmetic genital surgeries and other medically not necessary interventions violate human rights and must stop.

To all those among you, who in spite still choose pursuing a career as genital mutilators, to you I with all my heart, may a horde of crazed hermaphrodites find you, who will direct their anger not at themselves, but against you. May they turn your lives into hell with lawsuits for grievous bodily harm, may they ruin your reputation and plunder your bank accounts! And to those, who even then still don't have enough, may your hand rot off, which you used to mutilate defenceless children! And perhaps, one day even a hermaphrodite will come to you with a pair of hedge shears, and will teach you what it feels like having to scrape a living with scarred genitals! And the same also to all of you, who, though you don't perpetrate the mutilations by yourselves, still participate or look the other way.

However, to all those among you, who will abide by „first do no harm“, and one day will enter the medical profession in the name of humanity, to you, even more with all my heart, I wish you all the best for your future.

Published on Thursday, September 8 2011 by Zwischengeschlecht.org