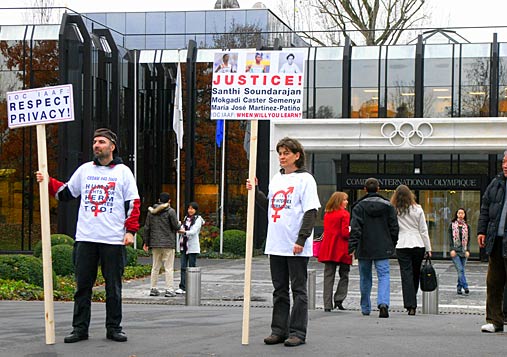 Discriminating, unfair and harmful treatment of intersexed athletes ("hermaphrodites") in women's sports has a long and painful history. The "suspected" athletes' dignity and human rights keep getting violated on a regular basis by both of the ruling international sports bodies, the International Olympics Committee (IOC) and the International Association of Athletics Federations (IAAF), as well as by their subsidiaries and affiliates.

Until today, the governing bodies keep on denying their responsibilities and refusing dialogue, as well as seemingly reacting only when forced by public pressure, and if so pro forma only.

Case in point: The IOC's attitude with regards to their syposium on "'ambiguous' gender cases" ending in Miami today.

Accused as cheaters, "suspicious" athletes are denied their rights to due process, informed consent and medical privacy, arbitrarily stripped of their medals and banned from further competition without proper possibility to appeal.

Public shaming and exposure of "suspects" as "sex test failures" and "hermaphrodites" is used a regular part of the procedure, serving as a compliance tool in order to keep "dubious" athletes from competing (i.e. forcing them to feign injury, undergo surgery or "retire quietly").

Unfortunately, since the decision to abandon the mandatory sex tests for women athletes, and replacing them with discretionary tests for individual athletes on grounds of "suspicion" or "challenge" (as the IAAF policy tellingly puts it), for (suspected) intersexed athletes the situation grew considerably worse, also due to less supervision by women's organizations and other pressure groups.

As the recent "cases" of Santhi Soundarajan and Mokgadi Caster Semenya [1] illustrate, athletes hailing from poor "developing countries" without actual possibilities to defend themselves against this injustice, are treated particularly inconsiderately.

At the moment, both the IOC and the IAAF still have no transparent, fair and internationally binding ground rules concerning the participation of intersexed athletes. In contrary, arbitrary exclusions based on inapt and intransparent „sex tests“, sometimes consisting of a Barr Body Test or a hormonal analysis only, are still widespread.

Although the IOC introduced a "consensus on sex reassignment in sports" in 2003 [2], which the IAAF refined to its "Policy on Gender Verification" of 2006 [3], both are not internationally binding and are arbitrarily interpreted or plainly ignored by the parent sports bodies and their local or affiliated organizations (see e.g. the "cases" of Santhi Soundarajan and Mokgadi Caster Semenya).

Further, both documents cater primarily to transsexuals, not to the intersexed, and were obviously drawn without consultation by the intersexed themselves and their organizations.

Cosmetic genital surgeries on intersexed children and other forced treatments without a medical indication are arguably the worst human rights violation within the "developed world" since World War II. [4]

These barbaric "cosmetic" treatments, which by experts have been compared with the effects of female genital mutilation, include, but are not limited to:

- "corrective surgery", e.g. amputation of the penis/clitoris a.k.a. "clitoral reduction"; "penile reconstruction"; "hypospadias repair"; etc.
- carving an artificial "neo-vagina" which has to be permanently dilated
- castration, followed by lifelong hormone "therapy"
- pre-natal hormone "therapy" (introduced in the late 1970s)
- concealing the truth from the "patients" [5]

Intersexed individuals, their organizations and allies criticize these severe forms of medical abuse since the early 1990s, apparently leading to some out of court settlements with fallible hospitals in combination with "confidentiality agreements" imposed on the suing parents. In 2009, the German intersexed Christiane Völling won a damages suit against her former surgeon, who castrated her without her informed consent (as it is standard practice with "hermaphrodites") [6]. Also in 2009, the UN-Committee CEDAW criticized the forced surgeries on intersexed children [7].

However, the IOC and the IAAF continue to advocate and impose medically not indicated surgeries on intersexed athletes, even in cases where the sports bodies fail to bring forward any evidence that the athletes concerned would have any advantage from being intersexed.

In conjunction with a congress by the exact medical trade responsible for the decade long abuse against intersexed children, the IOC and the IAAF organized a symposium in Miami Beach concluding today.

On this occasion, the human rights advocacy group Zwischengeschlecht.org had held a protest at the IOC's headquarter [8], asking the IOC in an Open Letter [9] to include or at least consult the intersexed themselves and their organizations as well. In their official answer to the Open Letter [10], the IOC ostentatiously chose to ignore this concern.

Another concern mentioned in the Open Letter by Zwischengeschlecht.org related to the unfair and damaging treatment of Santhi Soundarajan by IOC affiliate organization OCA. Here, the IOC just issued a blanked denial of any responsibility.

[2] IOC-"Statement of the Stockholm consensus on sex reassignment in sports" (PDF): http://www.olympic.org/Documents/Reports/EN/en_report_905.pdf
IOC-"Explanatory note to the recommendation on sex reassignment and sports" (PDF): http://www.olympic.org/Documents/Reports/EN/en_report_904.pdf

[4] The Hounding of Caster Semenya and the Extermination of Hermaphrodites in the "Developed World":
http://zwischengeschlecht.org/pages/Semenya-Soundarajan-Discrimination-of-Hermaphrodites-in-Sports

[7] Germany was slapped for refusing dialogue with intersex-NGOs and urged to deliver a progress report: (CEDAW/C/DEU/CO/6, 4., 61., 62., 67., PDF): http://www2.ohchr.org/english/bodies/cedaw/docs/co/CEDAW-C-DEU-CO6.pdf
The relevant bits of the Recommendations (english at bottom): http://blog.zwischengeschlecht.info/post/2009/02/13/CEDAW%3A-Schriftliche-Empfehlungen-an-die-Bundesregierung
Report from 43rd Session (in German): http://blog.zwischengeschlecht.info/post/2009/02/05/Genf%3A-UNO-mahnt-Bundesregierung