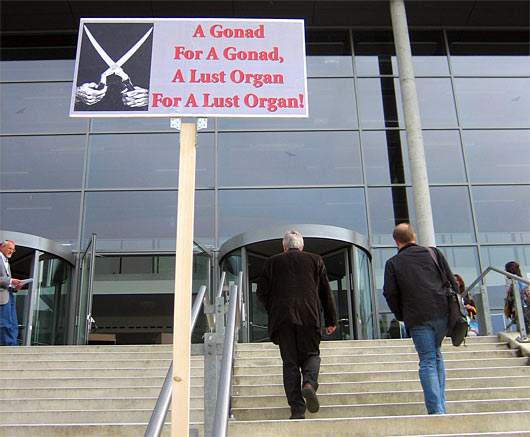 For 60 years now, the practice of cosmetic genital surgeries on little children with “atypical” genitals continues. In all these years and decades, the endocrinologists, surgeons and other clinicians responsible for these surgeries couldn’t be bothered to gather evidence for the alledged beneficience of these surgeries, or even to do consistent follow-ups or only disclose statistics, but continue to operate on mere anecdotal evidence.

For 20 years now, survivors of these surgeries oppose them publicly, and consistently criticise them as “immensely destructive of sexual sensation and of the sense of bodily integrity”. (Cheryl Chase: Letters from Readers. 1993, The Sciences, July/August, 3) For 20 years now, the clinicians concerned refuse to listen, let alone acknowledge these grave concerns, even worse, “their belief in the safety and efficacy of their surgery is essentially impervious to data”. (Cheryl Chase: What is the agenda of the intersex patient advocacy movement? 2003, The Endocrinologist, May/June, 3)

As members of a human rights advocacy group and persons who are either victims of these inhuman practices and/or personally know many others, we feel we are very saddened and concerned that to our understanding a majority of the speakers and chairs at the 3rd Symposium on Disorders of Sex Development seems to refuse to listen to your former patients and to acknowledge the ongoing suffering and criticism of survivors of non-consented cosmetic genital surgeries during their childhood, but in contrary continue to perform early surgeries, and to advocate them in scientific publications and in the media nonetheless, e.g.:

(Many more examples can be found on our homepage and on the blog, where we will continue to document such statements.)

In our understanding especially appalling are the repeated statements also by aforementioned  clinicians relishing in “surgical challenges”, stubbornly continuing with their “experiments” in the prospect that “in 20 years surgery will be much better”, obviously without any care, pity or compassion with their unfortunate past, present and future “subjects”.

Same as the continuing scorn and intolerably paternalistic approaches towards adult survivors speaking out about their suffering and demanding an end of non-consented cosmetic genital surgeries on children and minors, trying to marginalise their experiences, deriding them publicly and denying their right to voice their experiences and opinions (e.g. Olaf Hiort: taz 6.11.2007, to mention just one example). Same as the claims of clinicians, actually they would be the ones getting victimized by survivors and human rights advocates (e.g. Laurence Baskin: Stanford Medicine Spring 2011, to mention just one example).

While on the other hand, clinicians refuse to deliver honest answers to critical questions, but instead continue to bring forward the same excuses and lies for decades, see e.g:

“There is a serious ethical problem here: risky surgeries are being performed as standard care and are not being adequately followed-up. Intersexuals are understandably tired of hearing that “long-term follow-up data is needed” while the surgeries continued to occur. On this, see especially the guest commentary by David Sandberg, “A Call for Clinical Research,” Hermaphrodites with Attitude (Fall/Winter 1995-1996): 8-9, and the many responses of intersexuals in the same issue.” (Alice Domurat Dreger: „Ambiguous Sex“ – or Ambivalent Medicine?, The Hastings Center Report May/June 1998)

The 3rd Symposium on Disorders of Sex Development claims as its motto: “What we‘ve learned and what we need to learn”. We would like to respectfully submit again one more time: Apparently, Ethics and Human Rights would be core topics where very much learning might be in dire need.

There are many distinguished experts in the field of Ethics and DSD, e.g. Alice Dreger, Katrina Karkazis or Ellen Feder. Unfortunately, none of these were invited. In our opinion, this demonstrates an obvious lack of willingness to enter into a real debate in general and to answer to any critical questions in particular.

There are also many reports and statements by Human Rights Advocacy Groups (e.g. Terre des Femmes 2004, CEDAW 2009, Amnesty Germany 2010) and publications by experts in these fields (e.g. Hanny Lightfoot-Klein 2003, Fana Asefaw 2005, Nancy Ehrenreich/Mark Barr 2005) clearly stating that non-consented cosmetic surgeries on children gravely violate human rights (particularly the Right to Physical Integrity) and who underline the similarities and parallels between these surgeries and the practice of female genital mutilations. Again, we feel an obvious lack of willingness by the DSD Symposium to enter into a real debate in general and to answer any critical questions in particular.

It is our understanding, that in your capacity as medical practitioners you have plenty of patients with real medical needs who depend on your professional help.

Therefore, we would like to respectfully suggest that you might focus your efforts on helping those patients, of which we are sure that they are deeply grateful for your services, but on the other hand abandon unethical practices like non-consented cosmetic surgeries on children, for which, as you are surely well aware, frankly many, many of your former patients loathe and despise you from the bottom of their hearts.

And we humbly suggest that you do so while you still can on your own terms and by yourself.

The human rights advocacy group Zwischengeschlecht.org demands the prohibition of cosmetic genital surgeries on children and minors and „Human Rights for Hermaphrodites too!“ 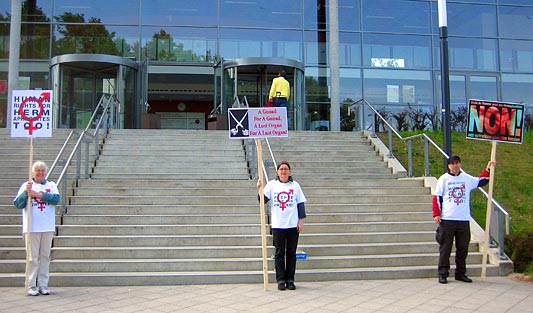 Published on Saturday, May 21 2011 by Zwischengeschlecht.org